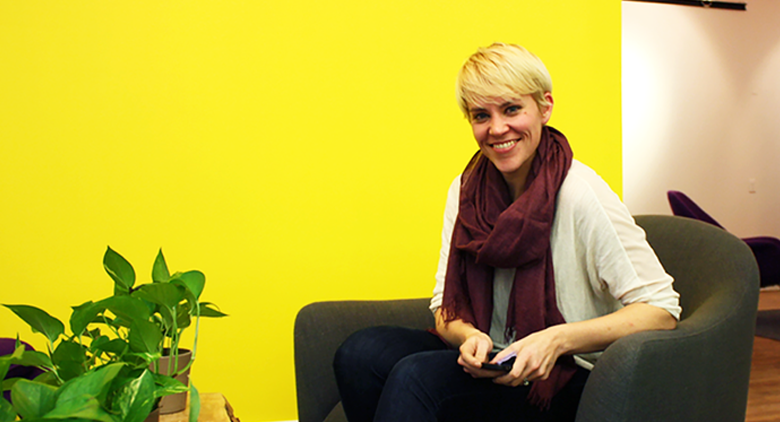 Jillian Moulton talks like an ideal HR director should—honestly, quickly, and with a contagious smile. She sits with Namely in a neon green conference room in one corner of the JW Player office, the online video player that streams billions of videos monthly on more than two million sites. Her arrival seven months ago at the rapidly growing, successful tech company came just in the nick of time—as far as HR was concerned. “Before I came, I think it was a lot of putting out fires as they came up,” she tells me, grinning, her blonde bob bouncing. Any expanding company can relate to the challenge of doubling headcount; JW went from 36 to 85 employees in a year before Moulton arrived. “When I interviewed for the role, they all admitted, ‘We probably should have hired for this three months ago.’”

Her transparency is refreshing—and perfectly mirrors the culture at JW. The company’s new office takes up a whole floor on 38th Street between 5th and 6th Avenue. The bright, open space—no individual offices—means anyone can stand up and talk to a coworker on the floor, CRO and CEO included. JW was ranked among the 30 best places to work by Internet Week in 2014, and it’s one of the world’s most popular online video players. This past winter, the company’s yearlong plan, including financials, was laid out in full for all employees to hear at an all-company meeting. Before we sit, we pass a cozy alcove with comfy chairs. One has a loaded Nerf gun resting on it. Moulton, admittedly, is a bit of startup culture clichés.

“I feel like startups right now have become so stereotypical about what they’re going to throw at you,” she says. “They’ll throw snacks, they’ll throw events… and really what it ends up being is just throwing money.” HR professionals, she says, should look at where culture is lacking, and then decide what investments can spark engagement. A snack room, really, is a conversation hub. A happy hour? An opportunity to present on a learning topic. “You never push it. You can always just spark it. And it has to take fire,” she says. “Buy-in is the biggest thing.”

That’s tricky when your headcount is just passing 100 and your company plans to be 130 to 140 by the end of 2015. Before Moulton, HR at JW was a mix of an office manager handling administrative work and hiring managers doing a heavy load of interviewing. The company reached a tipping point—as many growing companies do—when an HR director was simply needed, right around the 80-employee mark. For Moulton today, in addition to recruiting new, experienced staff and using Namely to keep close tabs on performance, she spends her time meeting heads down with the executive team, planning for the future.

Honesty lights the way. Moulton’s personality matches that of Dave Otten, the company's CEO, both full of energy and with a fine-tuned B.S. detector. After Moulton interviews candidates and before they sign on, she passes them to Otten who spends 30 minutes with each. It’s the equivalent of running the JW culture through a fine-tooth comb. “He wants people onboard who are willing to bring their ideas to the table, who aren’t wilting flowers,” she says.

“When you get 100 people flooding in, you can’t cling to the culture that was. It might have been a beautiful thing, but you’re going to have 100 other people wanting to have an impact.”

Moulton, of course, is anything but. After earning her B.A. in Advertising from Oregon University, Moulton went on to study Lecoq physical theater—an , expressive European style. The metaphor between professional and a casting director isn’t lost on her. She fills each role with the most appropriate actor, and every interview is an audition. “In a way, the stakes are even higher in HR because it’s about your career, your growth, your personal investment,” she says.

After four years working as an HR manager at both a trading tech solution and an online curated marketplace, Moulton landed at Mashable, where she first implemented Namely. Her title may have been Administrative Operations Manager, but she was soon wearing many, many hats during her nearly three years at the leading news site. Not only was head of HR, she was head of Culture, IT, and Office Facilities.

The broad nature of her role an emblem of the company’s blazing fast growth. For the two and a half years she was at Mashable, more than doubled from 60 employees to 160, almost identical to JW’s projected growth.

When asked about the vibe at JW, Moulton first mentions kindness. “I like to call it a good guy culture,” she says, before quickly qualifying that by means of JW’s “innovation ideology.” Positive collaboration and community are bred in the product itself. The player began as open source and is now the second-most used video player behind YouTube, Moulton says.

"I want to have a robust performance system that allows employees to have their voice."

What separates JW player from its competition is that customers retain ownership of their data. And the same is true for an employee's work at JW. "You can own what you do here," she says. And no one's work goes unnoticed. Everyone is contributing something big, a piece of a product that's huge. Innovation is the name of the game.

So it's Namely's newsfeed, PTO tracking, and performance reviews that keep JW player connected, from Moulton to managers to employees. Namely keeps the conversation going between “100, 200, 300 people, which is almost impossible,” she says.  But everyone has bought in. “With the social media style that Namely does it, it is possible.”

What’s the right word for transforming at a growing company? Dismantling? Rebuilding? Evolving, Moulton says. “When you get 100 people flooding in, you can’t cling to the culture that was. It might have been a beautiful thing, but you’re going to have 100 other people wanting to have an impact.” She’s most excited, as is JW’s CEO Otten, to put all company goals in Namely, starting broad on the company level and moving down to granular employee goals.

In the very same way the video player was built, JW and Jillian Moulton are building a vibrant culture, piece by piece. “There’s that adage of always taking input and being very careful about implementations,” she says. “You can’t do everything at once, but you can take everybody’s feedback and let it gestate inside you until you pull out something that’s beautiful.”

She pauses, then smiles. “That’s not the most eloquent way to say that!” she says, laughing.

See how Namely can help keep your growing company together. Schedule a demo today!